Bollywood has its own share of woes when it comes to bringing together a good pair especially when they have shared a relationship with each other in the past. When the on-screen chemistry of some couples have been appreciated by the audience but they have already broken up off-screen, it can be difficult to cast them again. But there are some actors who have respected their profession and come together to act once again on the silver screen putting their past behind them. Here is a list of 5 movies with off-screen ex-lovers.
Udta Punjab

Kareena Kapoor and Shahid Kapoor shared an awesome on-screen chemistry in Jab We Met. But that was the time when the couple was in a relationship in real life. When their love story fell apart, the audience sighed to have lost another great on screen couple. But with their recent appearance in Udta Punjab, it appears that they have been able to put their past away and continue to share a screen. It is one of the latest movies that casts ex-lovers on the silver screen.
Tamasha

Ranbir Kapoor and Deepika Padukone starrer Tamasha is another movie which has casted the two stars after they broke up. Their love story didn’t really work out in real life, but it looks like we still find them to be interesting as a couple on the silver screen. Directed by Imtiaz Ali, Tamasha has a great plot and some splendid acting. It is one of the new Bollywood movies with ex-lovers playing lead roles. Available to watch on Spuul
Dil Dhadakne Do

Anushka Sharma and Ranveer Singh share a love story in this new movie despite their unsuccessful off screen love story. While the movie has other stars on the lead roles too, Anushka and Ranveer are a couple in the movie who have had a relationship off screen too. Even though they parted ways long back, the audience found it to be interesting to see them acting together again. Available to watch on iTunes, Google Play and YouTube
Ek Tha Tiger

Salman Khan and Katrina Kaif had created a buzz in the Bollywood circle with their love affair, but when it ended, we felt we would never see the two acting together again. But they surprised us by coming together on the screen for Ek Tha Tiger which turned out to be a successful movie. Available to watch on Google Play, iTunes, Hungama, Spuul and YouTube
What’s Your Rashee? 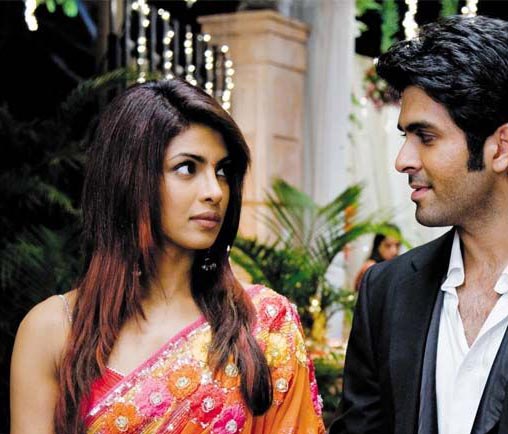 When Harman Baweja and Priyanka Chopra ended their love affair, we were not sure if we would see them acting again. The two came together for an unsuccessful attempt to recreate some magic on the silver screen in the movie ‘What’s Your Rashee?’ but unfortunately it did not work out. Available to watch on Eros Now